Albertslund Forsyning is a municipally owned and operated utility covering most of the heating demand in Albertslund Municipality.

Today, the utility’s boilers act as peak and reserve loads for VEKS, from where almost all heat is purchased. Since 2015, Albertslund Forsyning has also taken surplus heat via a heat pump from a local data centre. Albertslund Municipality’s building stock was primarily built from the early 1960s until the early 1970s. A large part of the homes are non-profit rental housing, which is being renovated in large projects with subsidies from the National Housing Fund. Newly renovated residential areas and newly built residential areas are today provided with low temperature district heating via shunts. Thus, work is being done diligently on upgrading the city’s other buildings, so that the temperature can be lowered throughout the city. A strategy for 100% low temperature supply from 2026 has been adopted.

Albertslund Forsyning offers end customers to take over the operation and service of their heating units for a fee. All heat meters have been replaced with smart meters. Therefore, there is currently great focus on the possibilities for active use of the large amount of meter data. All major district heating issues are dealt with by a user group, which represents all residential areas in the city. The close contact with end-users has over the years given the opportunity to go a little further than other similar heat suppliers. This involves the work with “red consumers”, who have poor cooling and high energy consumption, support for test house renovations, and most recently on the above-mentioned strategy for transition to low temperature district heating, throughout the city from 2026. 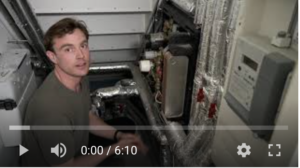