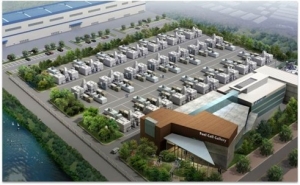 The Gyeonggi Green Energy park consists of 21 2.8 MW fuel cell power plants, for a total output of 59 MW. The park is compact, sitting on 2 ha of land, and when operational will provide both baseload power to South Korea’s grid and heat for a district heating system.

The park is expected to be commissioned this year. “The scale of this installation is contributing to the power and heating needs of an urban population and generating the electricity in a highly efficient and ultra-low emission profile that supports our National renewable portfolio standard,’ said Tae-Ho Lee, Gyeonggi Green Energy’s CEO.

South Korea is moving ahead with combined heat and power, with another 19.6 MW fuel cell park in Seoul City to provide district heat and backup power for a nearby rail depot. This park is also expected to be operational by the end of 2014.