EurActiv* reports that a bloc of 35 Ukrainian cities has sent an urgent plea for European help in scaling up the efficiency of their buildings, district heating and transport networks in a bid to curb Russian energy dependence. Their coverage follows:

The letter, which EurActiv reports it has seen, was sent by the Association of Energy Efficient Cities of Ukraine (EECU) which unites local authorities from the country’s east and west, encompassing two million people. 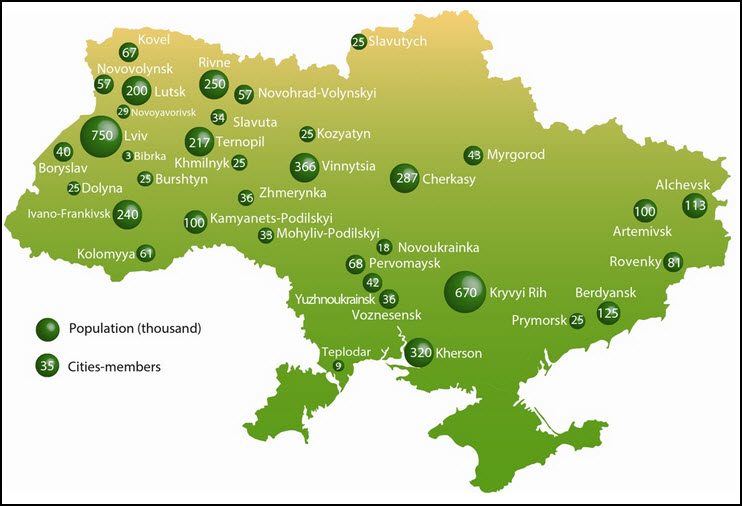 EECU member cities and their populations

The EECU is a voluntary NGO, created to facilitate the promotion of energy efficient principles among member municipalities. The organization’s focus is upon transforming local economies into sustainable communities with an emphasis on information, exchange of useful ideas and experience, new technologies and managerial know-how in resource allocation. EECU list of main partners includes:

■ Minister for Housing and Communal Services of Ukraine

■ National Agency of Ukraine for Efficient Use of Energy Resource

The outreach has sparked fresh calls for EU action on efficiency in an energy security report next month that will weigh measures to curb Europe’s reliance on Russian gas, some 40% which arrives via Ukraine.

The former Soviet republic’s need to wean itself off gas and nuclear power dependency is described as “critical” by Volodymyr Harazd, the EECU’s president and the Mayor of the City of Dolyna, in the missive. He cites “hostile and often aggressive actions by the Russian Federation against Ukraine” and “the limited ability of the central government in Ukraine to address these” as pressing reasons for tackling energy waste.

“I appeal to you with a request to share this [energy efficiency] know-how with Ukrainian municipalities, by urgently launching an intensive twinning programme to provide our municipalities with the professional skills and resources required to address the massive [energy] crisis, ” Harazd writes in the appeal, which is dated 25 April 2014.

At least five of the EECU’s cities are located in Ukraine’s Russian-speaking east, where national sympathies tend towards the other side of the border. But Tatyana Nikolaevna, the first deputy mayor of Artemivsk, a town on the Russian frontier, gave Harazd’s letter unqualified support. “The authority knows about and supports the letter,” she told EurActiv yesterday [5 May] over a crackling phone line. “Our city government was elected to improve the life conditions of its people and develop them along European standards.”

The EECU’s letter was sent to Energy Cities, a grouping of some 1,000 environmentally-friendly local authorities in the EU. Gérard Magnin, the group’s director said that it illustrated how energy savings could “mobilise and provide a unifying bond” in societies. “Political infighting between states can be transcended when people on the ground are trying to find common solutions to joint problems,” he told EurActiv in emailed comments.

As a collective, Energy Cities responded to the EECU plea by sending on its own letter to the Energy Commissioner, Günther Oettinger, last Friday (2 May).

Energy security strategy
In it, Eckart Wurzner, the Mayor of Heidelberg and Energy Cities president, called for an intensification of EU exchanges to aid Ukrainian strategic energy action plans, which involve compiling baseline emissions inventories. He also proposed a parallel focus on energy efficiency measures in the EU’s report on energy security, due for release in June.

“Should the European Commission provide reinforced support for such cooperation, no doubt that numerous EU local authorities would be ready to provide increased technical assistance to their Ukrainian peers,” said Eckhart in the letter, which EurActiv has seen.

Last month, Ukraine said it would look to the EU for gas deliveries to counter any potential Russian embargo on its fuel supplies. A US-brokered deal to pipe reverse-flow gas deliveries from Slovakia duly followed.

But questions remain over the amount of gas that can be reverse-flowed, and Ukraine’s lack of credit-worthiness may be one factor deterring EU states from sending gas its way. An imminent floating Lithuanian LNG facility and the proposed Krk island terminal in Croatia have also been talked up by US officials as strategic buffers against fuel shortages in Ukraine this winter, as has the Southern Corridor project.

Europe currently gets roughly a third of its gas imports from Gazprom though and is itself vulnerable to Russian pressure. Measures to deal with any use of the Russian “energy weapon” were discussed by the G7 yesterday.

Background
Russia’s gas export monopoly Gazprom sells its gas to EU clients under secretive bilateral agreements. In 2009, Ukraine was paying Gazprom a price of $400 per thousand cubic metres (tcm) under an agreement signed under former Prime Minister Yulia Tymoshenko. After former President Viktor Yanukovich refused to sign the EU-Ukraine Association Agreement, and opted to develop relations with Russia instead, Gazprom brought down the price of its natural gas for Ukraine by a third – to $268 dollars per tcm. But after Yanukovich fled the country and a new pro-European government took over, Gazprom raised the price by 80%, to $485 per tcm.

Ukraine is currently trying to obtain gas through “reverse flows” from Poland, Hungary and Slovakia. Although this is basically Russian gas, it was still cheaper than the price of around $400 per tcm Kyiv was paying until the December 2013 agreement.