Denmark is a front runner when it comes to solar heating on the large scale. ARCON Solar from Skørping/Denmark has just signed an agreement to install what will be the world’s largest solar thermal installation with no less than 52,491 sqm solar collectors to be established in Vojens. Financial benefits, increasing interest in independence of fossil fuels give strong growth to ARCON.

The huge installation in Vojens will be producing the majority of the energy in the summer half year. As the demand is low in summertime, the energy will be stored in a water basin in which between 190 and 200 million liters of water will be heated up. In this way the energy can be used in wintertime when people turn up the radiators again. Specifically the possibility to store the CO2 neutral energy makes solar thermal energy attractive to district heating stations and companies with high heat consumption in the production.

”Contrary to other sustainable energy concepts it is worthwhile to store the solar energy for later consumption. It is possible to offer rather precise calculations to show how big a share of the total heating requirements can be covered using solar thermal energy, thus making the most of the advantages in the operation, not least economical”, so Søren Elisiussen, managing director of ARCON Solar. 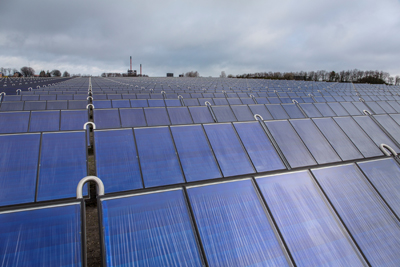 Another important aspect regarding the demand for large-scale solar heating systems is the insecurity when it comes to the development in prices on the market for fossil fuels. A solar heating installation has an expected lifetime of at least 25 years. In addition to the investment in the installation itself, you must add the ordinary cost of operation and maintenance in this period of time, whereas the energy from the sun as you know is free of charge. This means that for 25 years you are guaranteed the same fixed energy prices and you reduce your dependency of fossil fuels. Security and minimum risk have become a strong purchasing argument.

”Danish district heating stations in later years have discovered that large-scale solar heating is not only a politically correct investment, but also a good stroke of business. Especially the long-term knowledge of the cost level is an important motivation for the demand. This knowledge is now also spreading internationally, and we expect that already this year we will see a major breakthrough for our exports”, says Søren Elisiussen.

ARCON Solar is a specialist within large and medium-sized solar heating plants and market leader within this market segment in Europe. ARCON has installed more than half of all plants bigger than 1,000 m² in Europe. ARCON is a Danish company, based in Skørping/Denmark where also ARCON’s production facilities are located. ARCON has been owned by VKR Holding since 2007.