Copenhagen is the first three time winner of the “Quality of Live Survey 2014” carried out by the international magazine Monocle. But why did the Danish capital win? And what makes a city great living in? Read on and find out. 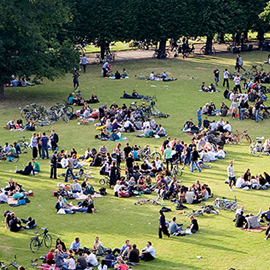 Waterfront promenades, grassy pedestrian zones and green parks are just a few out of many reasons why Copenhagen reclaims the title as the world’s most liveable city.

But why is liveablity so important?
According to McKinsey & Company, the global number of urbanites is the highest in history and growing fast. By 2030, 60% of the world population, almost five billion people, will be city dwellers.

This prognosis calls for urgent planning and design solutions to create cities that are liveable, today and for posterity.

“Urban planning is all about the human dimension”
For decades renowned architect Jan Gehl has been a central figure in the drive to create vibrant, humanscale public spaces in global cities like Copenhagen, New York and Melbourne. To him the answer is simple, though city leaders around the world may find it harder to grasp: “Urban planning is all about the human dimension. Not cars, not industries or businesses. If people find a city worth living in, all else will follow”. He continues: “At the heart of the best urban design is a deep understanding of how people live on that particular block, in that neighbourhood, in that city, in that specific region. Quality of life is a new differentiator. Years ago cities competed on car lanes. Now world city leaders are shifting their mind-set towards people”.

“Liveability varies depending on regional and cultural differences”
Copenhagen is not alone in chasing the human dimension of city planning; cities around the world are aspiring to enhance their liveability. To Herbert Dreiseitl, director of the Liveable Cities Lab at Ramboll, success in this endeavour requires a long, conscious effort. Since 1980 he has specialized in integrating art, urban hydrology, environmental engineering and landscape architecture in an urban context.

“After years of ideological discussions on sustainability, smart technology and resource management, we need a wider perspective to be more creative and holistic in urban planning. Topics like natural resources, connectivity, well-being or proactive policy development are essential conditions for ensuring liveability in cities and settlements, but they often require a change in mind-set,” he says, drawing on his own experience working with some of the world’s megacities – London, Berlin, Singapore and Beijing.

“Liveability varies depending on regional and cultural differences. We can’t formulate a uniform definition, but cities can nudge people to change their mind-sets and behavior patterns. In Singapore, for instance, most men want a fast car if they can get it. This amounts to more pollution and most likely a lack of exercise. If people were culturally raised to think that success meant having time to bike to work every day a lot of urban challenges would be eliminated. City planners can be catalysts for such a mind-set shift through long-term visions and strategic planning,” he explains.

An integrated approach Henrik Rosenberg Seiding, Group Director for Sustainable Society Development at Ramboll, explains: “In our work with liveable cities development in areas as diverse as the Middle East, Europe and the Arctic, we have identified five driving forces of modern society development: social coherence, economic growth, environmental sustainability and good governance. Through our research study we have established an analytical framework that has shown its relevance throughout the world when we give strategic advice to city planners and executives. Whatever the size and geography of the city, the fundamental dynamics are universal. The difficult task is to integrate universal dilemmas and local solutions while respecting culture, tradition and endowments.”

Successful urban development occurs when the five driving forces reinforce each other and allow people and society to develop prosperously. Ultimately, however, the goal is singular: “In all its complexity city development is about people. Human capital is, after all, a city’s main asset,” he says.