New significant large-scale solar heating project in Tibet, China, is underway. The 20,000 MWh system is the largest to be built in Tibet to date and will supply the city of Zhongba with renewable district heating. Arcon-Sunmark Large-Scale Solar Systems Integration Co. is the turnkey supplier. Awareness of solar district heating systems is increasing internationally, especially in China and Europe.

Arcon-Sunmark Large-Scale Solar Systems Integration Co., the Arcon-Sunmark and Sunrain joint venture, has initiated construction of the second large-scale solar district heating system in Tibet, China. After successfully completing the solar district heating project in Langkazi by the end of 2018, the company now turns its attention to the city of Zhongba and a new turnkey district solar heating system, including piping network, connection to buildings and installation of radiators. The system has a 34,650 m2 collector field with an annual energy output of 20,000 MWh. A 15,000 m3 tank provides storage of the solar energy and enables a 90% coverage of the annual heat demand.

“We are very proud to begin our second project in Tibet, China. Solar heating systems are cost-effective to maintain and has a long lifespan even under harsh conditions. This means that remote and to some extend isolated communities on the Tibetan Plateau will benefit greatly from projects like the ones in Langkazi and Zhongba,” says Aaron Feng Gao, Managing Director, Arcon-Sunmark Large-Scale Solar Systems Integration Co. 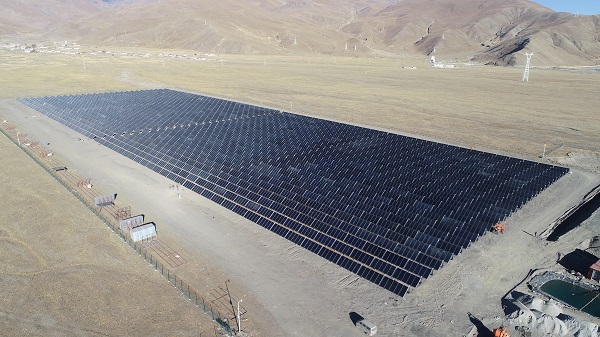 The project in Zhongba is prepared for a second phase and awaits the local authorities decision for an expansion of the project with the up to 50,000 m2 more in solar panel collector area.

Increasing international awareness
Interest in large-scale solar heating systems is increasing with China and Europe being the most active markets. Earlier this year Arcon-Sunmark announced the biggest project in Germany (Ludwigsburg, 14,000 m2), and in October 2018 the biggest solar district heating project in in Latvia (Salaspils, 21,672 m2) was confirmed. Both projects are under construction and demonstrate that large-scale solar heating will be part of the energy supply in the future. Large-scale solar heating is a proven and very adaptable technology which can complement existing facilities and supply renewable heating to communities and companies all over the world.

“The diversity of the latest projects in Europe and China is immense. Having a renewable energy source that is able to perform in such different climates as the Himalayas and Northern Europe, shows you how big the potential of large-scale solar heating really is,” says Thomas Karst, CEO, Arcon-Sunmark.