Engineers developing the HS2 super-hub at Old Oak Common in North West London are planning to tap heat from the brakes and engines of high-speed trains to heat water and power central heating of up to 500 new homes that could be built nearby.

Under the scheme, five air source heat pumps will draw warm air from the railway’s tunnels, where the waste heat from trains is usually extracted by traditional ventilation systems and seeps into the ground surrounding the tunnels.Instead, HS2’s plans will see waste heat fed into a local district heating system.

Set to be the UK’s best connected rail interchange, the new HS2 station at Old Oak Common will help kick-start the UK’s largest regeneration project, which aims to transform the former railway and industrial area, into a new neighbourhood supporting up to 65,000 jobs and 25,500 new homes.

In February 2019, HS2 unveiled the latest designs for its west London super-hub at Old Oak Common. 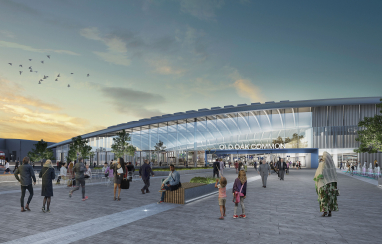 HS2 innovation manager Pablo García said: “HS2 is so much more than a railway. By taking a long term view of how the benefits of investing in the new high speed railway can be shared, we’re investigating how to provide sustainable, low-carbon heating and hot water to up to 500 new homes. Near Old Oak Common we’re building a crossover box. This is an underground hall that houses a points junction to enable trains to arrive and depart from any of the station’s platforms. Our plans would see warm air pushed into the crossover box by trains, in effect acting like pistons. It then rises to be harnessed by air source heat pumps, converted into hot water and transported to homes by insulated pipes.”

HS2 estimates that the investment in waste heat recycling system will pay for itself after just four years.

Compared to domestic gas boilers, recycling heat generated by trains’ engines and brakes can reduce the carbon footprint of 500 houses by more than a fifth (22%).

Pablo said that the Old Oak Common’s crossover box is the only place on HS2’s first section between London and the West Midlands that is capable of supporting waste heat recovery technology, and there could be more opportunities on the Leeds and Manchester routes.