A former Nazi anti-aircraft flak bunker is being transformed into a green energy power plant, which will be plugged into Hamburg’s district heating network.

Energy and utilities company Hamburg Energie has joined forces with IBA Hamburg to develop the facility in Hamburg, Germany.

The Hamburg-based “Energy Bunker”, when running at full capacity will provide up to 3,000 homes with district heating, and another 1,000 homes with electricity. 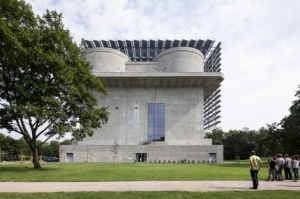 The Energy Bunker is outfitted with several sustainable technologies. The main feature is a 2 million litre water reservoir that acts as a large heat store and plugs into the existing Reiherstieg district heating network. The reservoir itself is heated by several methods: a biomass power plant and wood chip burning unit which feed into a large boiler, a solar thermal array installed on the roof of the bunker, and waste heat produced by a nearby industrial plant.

Giz Mag online reports that it was originally constructed in 1943 to serve as an anti-aircraft bunker, complete with gun turrets.

Though the British Army made an attempt to demolish the 42m high building on the war’s close, blowing up its massively thick walls was deemed too dangerous to nearby buildings. The British ultimately settled on destroying much of the interior, and the bunker remained in this neglected state for over 60 years.

The total cost of the project came to $36.5m and was funded by both the European Regional Development Fund (ERDF) and the Hamburg Climate Protection Concept.

In addition to the production of green energy, Energy Bunker also contains a war memorial, cafe, and visitors center, where people can learn more about the building’s history.