In September, the town’s municipal district heating company completed the installation of the largest field of solar collectors in the Baltic states. This project will contribute to Latvia’s goal to increase energy independence and transition to renewable energy sources. It will help the country further diversify its fuel supply and upgrade its existing district heating to low-emission systems.

Heating is Latvia’s highest energy-consuming sector. According to the Ministry of Economics, 70% of the country’s heat is generated in centralized systems, which suffer from aging infrastructure, insufficient or inefficient use of renewables and non-existent local or centralized cooling systems. There is a growing demand for innovative and emission-free heating solutions.

Salaspils may provide a model for other towns in Latvia interested in weaning themselves off of carbon heavy heating. Salaspils Siltums provides 85 % of the town with a population of about 18,000 people with district heat.The company has now acquired 1720 solar collectors, which will generate an estimated 12,000 KWh of power per year. A 28 meter high storage tank and a 3MW wood chip boiler complement the collectors.

The new system will enable a significant decrease in the utility company’s reliance on natural gas and the share of renewables in its energy consumption will grow by ~ 35%.  After the installation of solar collectors and the wood chip boiler, the district heating system will supply 90% of the energy required for heating water and buildings from renewable energy sources. Solar thermal energy will provide 20% of the total thermal energy transferred in the system.

The system will also reduce service and operating costs, which may allow for a reduced heating tariff of at least 5% to be applied to the utility bills of Salaspils residents in 2020 if accepted by the Public Utilities Commission.

Inspired by the vast deployment of solar collectors in Denmark, Salaspils’ system was built in less than six months by Latvian and Danish companies working in close cooperation. Total project costs were EUR 7.08 million, to which EU Cohesion Fund co-financing contributed EUR 2.73 million. In addition to the EU funds, the SEB bank provided a  EUR 2.8 million loan.

Salaspils Siltums, the local district heating company responsible for the project, is a well-known front-runner in energy efficiency and fuel diversification for its incorporation of renewable energy sources. In 2017, it received the Global District Energy Climate Award in the modernisation category. 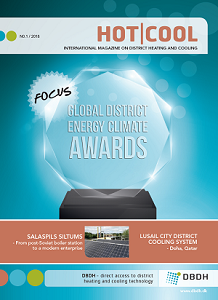 Ina Berzina-Veita from Salaspils Siltums, also the head of the Association of Latvian Heating Companies, led the project from start to finish: “This is a really important event, not only for inhabitants for Salaspils, but for anyone who is aware that sustainable solutions are increasingly needed also in district heating in order to meet everybody’s daily needs and reducing the negative environmental impact as well. With the realisation of this ambitious project, we have demonstrated that we are able to grow from a post-Soviet boiler house to a world-class company.”

At the ceremony marking the project’s completion, Latvian Prime Minister Krisjanis Karins applauded the solar project’s contribution towards local energy independence. Salaspils mayor Raimonds Cudars stressed that the project was an example of Latvia’s successful transformation from the Soviet legacy’s ineffectual district heating system into a sustainable, modern low-carbon heating system. Their words underscored that the event celebrated not only the conclusion of a single project, but also the start of a larger change in the energy system.

With the support of Latvia’s National Energy and Climate Plan, a faster uptake of solar thermal energy in the urban heating networks is expected. Solar technologies have recently become more wide-spread and competitive, lowering their price. Financial institutions like the European Investment Bank have also indicated their intention to provide more affordable loans for renewable energy projects.

Thus, the Salaspils solar project may be remarkable for its vision on long-term decarbonization, becoming a model for utility companies in other towns and cities.