Market opportunities in EU and integration of energy systems are the topic of the day when this year’s general assembly & energy conference takes place at Christiansborg on 30 March 2017, where the industry and politicians are invited.
By taking point of departure in acquired knowledge from the University of Aalborg and a large Danish export business, a realistic proposal of the future of district heating will be put forward. The conference will additionally provide an overview of the many opportunities available in relation to effective usage of resources. Finally, there will be a debate with different political energy spokesmen and good case stories presented.

More information can be found in the official invitation here.

On March 30, the Danish District Heating Industry (Fjernvarmeindustrien) held its annual energy conference at Christiansborg
The theme this year was MARKET OPPORTUNITIES IN THE EU AND INTEGRATION OF ENERGY SYSTEMS. “Denmark is a pioneer in the field of green transition and energy efficiency. This position must be maintained as it also has great significance for green exports and Danish workplaces”. This quote from the Government is the inspiration for this year’s conference, which took hold of the current market opportunities in the EU for the district heating and cooling sector.

It is the Government’s objective that there should be an interconnection of energy systems across countries and sectors as well as efficient use of resources. Therefore, the second theme of the conference was integration of energy systems with a focus on heat pumps, waste heat and new storage technologies. The conference provided an overview of the many options and some very new and revolutionary forms of thermal giga-storage. 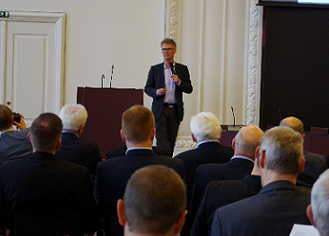 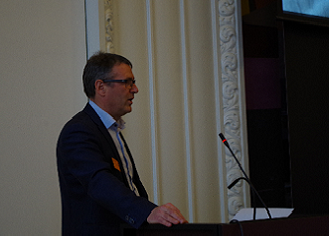 After a welcoming speech by the newly appointed chairman of DBDH, Jan Strømvig, Managing Director of Fjernvarme Fyn, the first presentation was given – by Torben Hermansen, Project and Marketing manager, COWI. Torben spoke about the possibilities of increasing the use of green electricity in the district heating sector which fits perfectly with the desire for the use of waste heat from the industry and a number of other heat sources that are available locally. One of the solutions are the heat pumps, which, in Torben’s own words, are basically just cooling machines adapted for heating solutions. The sector is striving against heat pumps that can use both the cold and the hot side of the pumps, but this is not the norm today. One conclusion regarding the heat pumps is that “big is beautiful”. Knud-Erik Andersen, CEO, European Energy was next on the stage with a presentation of the company’s latest invention: EE Gigastorage. EE Gigastorage is a technology that can heat large cities with power from the wind turbines and solar cells, waste heat and surplus heat from production companies. The system reduces the costs of integrating wind and solar power in the electricity grid, and European Energy expects it to play a major role in the global fight against climate change. According to Knud Erik Andersen, EE GigaStorage is a game changer in our fight against climate change. He sees no limits to the size of the facility, and it will be a competitive solution in nearly all coastal district heated or cooled cities. 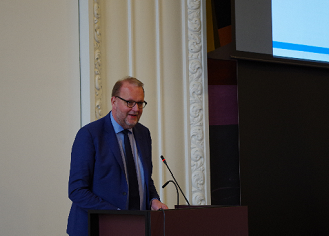 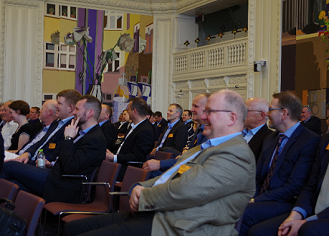 “Cheap green waste heat from industry”. This was the title of the presentation by Poul Rask Nielsen, Project Manager, Energy City Frederikshavn. Based on the goal of transition to 100% renewable energy by the municipality of Frederikshavn which includes the use of industrial waste heat, Energibyen Frederikshavn has succeeded in leading companies and suppliers of district heating systems together. The technical solutions and economic conditions for implementing the projects is present. District heating can therefore, by integrating the already known production systems and with effective heat pumps as the focal point, already now utilize waste heat from the industry and at the same time find use for the excess electricity generated by wind turbines, waste power plants or biomass power plants. Carlo Siebert, Owner and Chairman of IES Energy, contributed to the presentation. IES Energy is looking to export a new heat pump solution world-wide and has chosen Frederikshavn Havn as a partner, primarily because of Energibyen. Jens Hansen spoke about the technical side of the company’s project, thermal storage of electricity. After a coffee and networking break, Danish minister for Energy, Utilities and Climate Lars Christian Lilleholt came to the arrangement with his thoughts about the integration of energy systems and he offered some insight into new political tools that will influence the district heating and cooling sector. To introduce Lars Chistian Lilleholt, Political Analyst Søs Marie Serup, offered some humorous facts about the minister. Søs Marie Serup was also moderator at the following debate between spokesmen of the political parties, Sociademokraterne (Jens Joel), Enhedslisten (Søren Egge Rasmussen) and Dansk Folkeparti (Mikkel Dencker) . The panel was asked about various topics during the conference, e.g. about the new tax structure, etc. Also the Managing Director of the Danish District Heating Association, Kim Mortensen, was present with an interesting and relevant speech.

Henrik Lund, Professor at Aalborg University spoke about market potential in the EU: Which EU countries have the greatest potential to develop district heating? Aalborg University has for several years, together with various partners, mapped and modeled district heating and energy systems in Europe in order to influence regulations and energy policies at EU level. Henrik Lund describe and presented some of the different studies/scenarios, e.g. HRE1 – EU Energy Roadmap 2020. A challenge has been the perception that the countries in Southern Europe do not need district heating and vice versa, where the reality is that the cooling need of e.g. Italy is only 15%. One model showed that the more renewable energy, the more district heating. So the district heating in Europe is indeed large.

“Clean Energy Package: District Heating to boost EU Energy Transition”. This was the theme for Paul Voss, Managing Director, Euroheat & Power. Over the past three years, district energy has moved rapidly towards the center of the EU energy policy debate. This will certainly create tremendous growth opportunities for the sector and set the stage for the DHC to play an important role in the energy transition across the EU. At the same time, it will inevitably bring new challenges, particularly from a regulatory perspective, as policy-makers react to the industry’s new-found visibility with new demands for transparency and performance. According to Paul Voss, district heating still has a rather poor reputation despite being actually the backbone of a sustainable city. However, though, things are going in the right direction. 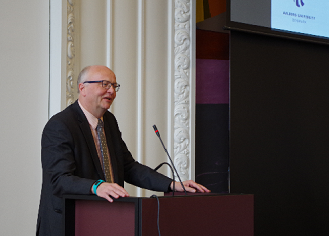 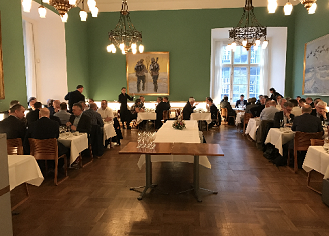 Bent Jensen, Group Senior Vice President, Commercial Services Buildings, Grundfos, talked about the market opportunities for the industry in Europe. The greatest climate challenge we face today is global warming, and low-temperature heating is a great potential to effectively reduce CO2 emissions, thus contributing to achieving the global goal. Bent Jensen offered a view on how the district heating market has changed and how Danish companies can leverage their technology and knowledge to increase Danish exports.