Envases Europe A/S in Odense produces tin packaging for the food and beverage industry. The company's main facilities were built in the 1950s. It included three boilers and a gas-fired hot water boiler. In 2020, the company decided to shut down its boilers and connect to the city's district heating system.

In addition, Envases wanted to reuse the heat that the company generated in production. Adding an additional metal print line, which along with other production lines generated more heat, was more than Envases could use in its 100,000-square-foot facility. Therefore, the company installed a heat recovery plant. Any extra, unused heat from the production was sent back to the district heating plant and benefited Odense's citizens.

"We had to recognize that gas heating with 140-degree hot water in our pipe systems was not up-to-date," says Henrik Knudsen, Facility and Maintenance Manager at Envases Europe. "And since Odense has a well-run district heating plant, this was a natural solution for us.

The need for heat management was increasing with district heating and heat recovery. Heating systems and zones make different requirements for flow and temperature. Control of flow and temperature for each type of building zone is done with a mixing loop consisting of a pump, valves, and sensors.

"We realized that all our mixing loops were very old," says Henrik Knudsen. "We needed something with the latest technology - and in this connection, we found MIXIT. MIXIT is a device that can control a mixing loop in a completely new way than before, where we were used to more or less having to control them manually over the entire plant. Today we have an intelligent control connected to our automated Building Management System via the MIXIT, providing data and control from the MANGA3 pump and the MIXIT unit. In this way, we can manage and optimize all the mixing loops in the production halls, warehouses, and office premises without ever having to send an employee out to the application, saving human resources." 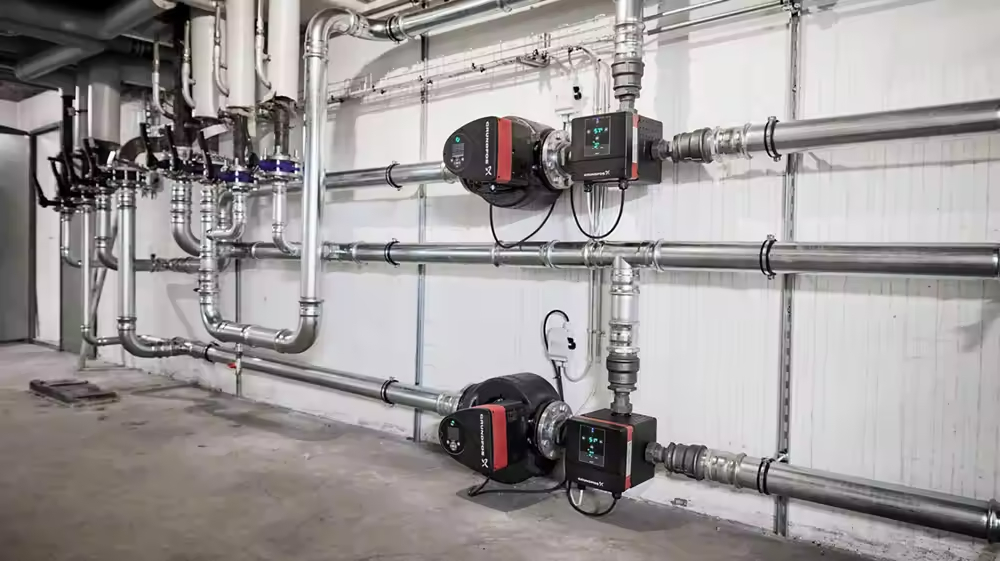 The MIXIT devices take over control based on the set points defined by the users. Then they can ensure that users get the most out of their heating system.
"One thing is that we have integrated MIXIT into our full building management system," says Daniel Bagger, Facility Supervisor. "Something else is that MIXIT can also be configured via the Grundfos GoRemote app – which is particularly useful when the mixing loops are placed in hard-to-reach places – for example, hanging high on the ceiling or places that require ladders." "Our technicians use GoRemote a lot. It means we no longer have to visit each individual mixing loop. Today, we just need to be within range of a Bluetooth connection. Then we connect to MIXIT with our smartphones and adjust everything from there. "

"Since we are connected to the district heating system directly, we are very, very focused on our flow – and especially our return temperature, because it is decisive for the bill we receive from the district heating company," says Daniel Bagger. "It also means that when detecting bad return water temperatures in certain zones in the plant, we can program built-in limiters at these data points, which means that MIXIT controls the cooling at 30-35 degrees. We are delighted with that. It means we can control the plant down to the smallest detail."

The tall red brick chimney at Envases is no longer in use. "It used to be a landmark for Odense," says Daniel Bagger. "But an era is over. We're done with gas-fired boilers. We're done emitting emissions into the atmosphere from here. We've switched to district heating. And we've become a much greener company. We can do it better – and MIXIT, in particular, can help us in the future."

The entire retrofit for district heating and heat recovery – as well as the 35 MIXIT units, some new MAGNA3 pumps, electrical cabinets, and more – has an expected payback period of 1.5 years.

Grundfos supplied 35 MIXIT units for the Envases heating system. The MIXITs challenge the whole idea behind the traditional mixing loop concept. Together with the circulation pump (in Envase's case Grundfos MAGNA3), the all-in-one unit functions as a complete solution.