A delegation from the Netherlands has spent two days looking at Danish district heating solutions in practice and asking about everything from organisational types to tariff models.

Korsør, Assens and finally Odense. This was the route when a delegation from the independent Dutch research organisation TNO visited Denmark on Thursday and Friday.
On Thursday, the Dutch first saw SK Forsynings solar heating system before moving on to Assens, which told about the journey from green heat to even greener heat. Friday took place in Odense at District Heating Fyn, which was able to showcase production facilities on a large scale and utilization of excess heat from Facebook's data center. The delegation also heard a speech about the PtX plans in the Triangle Region by TVIS Director Jørgen Nielsen.

In Denmark, they can see the drawing for a coherent "smart energy system" based on district heating and their questions have been about everything from tariffs to organisational models.

TNO publishes reports that are read and that matter in the Netherlands. They help prepare the heating law that is under way in the Netherlands. With this visit, therefore, we are helping to ensure that those who have to make an impression on this future law know something about district heating.

The Dutch delegation expresses great satisfaction with their days in Denmark: - Our visit to Denmark we have enjoyed very much. We have learned a lot and put many things into perspective by seeing the Danish solutions in practice and through a lot of good dialogue", says Professor Annelies Huygen who led TNO's delegation on the Denmark visit. 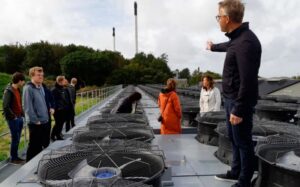 Fact: What is TNO?