By now, most everyone knows that the XXII Olympic Winter Games is a major international multi winter-sport event being held in Sochi, Russia. But it’s not generally appreciated that district heating plays an important role in the Olympic Park infrastructure, despite the fact that the athletic events are held on ice and snow.

A total of 98 events in 15 winter sport disciplines will be held throughout the Games. About half of the events will be held indoors in a complex of arenas in the Olympic Park in Sochi, on the coast of the Black Sea, in the Imereti lowland of the Krasnodar region (see illustration). The outdoor events will be held at the Roza Khutor ski resort in the Krasnaya Polyana Mountains, an hour’s drive from Sochi, nestled among the peaks of the Western Caucasus under the Aigba Ridge.

Hot water for the district heating system is produced at the nearby Adlerskaya Thermal Power Plant (TPP). The Adlerskaya TPP is a natural gas-fired combined heat and power (CHP) facility with a capacity of 227 Gcal/hr (3.97 million Btu/hr) of thermal output and 360 MW of electricity. The Adlerskaya TPP will provide more than a third of the projected peak electric load during the Olympics and will also provide the heat supply for the Olympic Park complex and the Blinov neighborhood in Sochi. 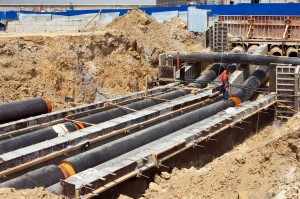 The hot water from the plant is conveyed to each arena by a distribution network of insulated pipes that was engineered, manufactured and installed by a specialized unit of SMIT Group, a member of the International District Energy Association. The high seismicity of the region was taken into account when designing the piping system and for this reason, trenching was used to lay the pipe. 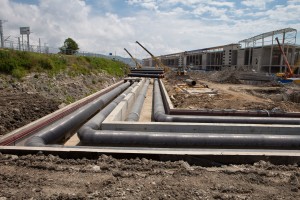 Another view of the district heating pipe being installed at Sochi Olympic Park.

SMIT Group also provided piping within the Adlerskaya TPP itself. SMIT Group notes that it is the only company in Russia that has efficient cyclopentane foaming machinery for pipe insulation.

The Olympic Park’s district heating distribution network consists of approximately 2,000 meters (1.2 miles) of polyurethane-insulated steel pipes with a nominal diameter of 700 mm (27.6 inches). The hot water is delivered to the arena buildings at a temperature of 115 degrees C (239 degrees F) and returns to the central plant at 70 degrees C (158 degrees F). The design pressure drop in the system is 1.6 MPa (232 psi).