District heating and cooling in Denmark

The Danish district heating sector has for many years been the center of attention for a lot of district heating producers and experts from around the world. Many are taken by surprise and are eager to learn more about the Danish experience. They find it unique compared to experiences made in other countries.

We are often asked to point out the most essential characteristics of Danish district heating. This is possible, but only with difficulties. Partly because it all seems natural to us but mostly because there are many opinions about what is most important. The following 10 characteristics are our suggestions. We will elaborate on them on this page.

Before 1973 the Danish DH system looked a lot like the system in our European neighbours. The total market share was very low, and DHP was mostly located in the major cities and mainly delivering heat to big public institutions. The oil crises in 1973 changed the role of DH in Denmark.

With the rapidly increasing oil prices, the 100 % oil importing country Denmark was in great need to change its energy mix. DH was seen as a cheap solution to replace the oil dominated heating solutions. The political and financial momentum was utilized to make long- term and expensive investments. The historical massive public investment at this point is of great importance for the further development of DH in Denmark. These investments made it possible to make large-scale DH solutions with competitive prices, and created a market for private investments in developing the sector.

Today DH has a total market share of 63% of the heating market and is mostly powered by non-fossil energy sources. The history of DH in Denmark has not peaked yet and the market share is expected to grow in the future. An important factor for this development is strong support from central authorities. Not support through price subsidies or artificial regulation, but by following a clear and steady energy policy with a green and cheap energy-mix as a goal. This has been done through a wide range of measures, including:

These measures, which combine the advantage of strong regulation and controlled use of market forces, are very important; however, they are far from sufficient.

The role of the municipalities in the implementation of the national energy policy is very important, as the municipalities have a natural interest in developing a good local district heating system for the benefit of the inhabitants in the urban areas.

The district heating network is regarded as a natural part of the urban infrastructure, through which all buildings in districts with sufficient heat density (i.e. sufficient population density) are supplied. Similarly, heat planning is an integral part of urban planning. Urban development areas are therefore provided with district heating as well as water, sewage and other services. Less densely populated districts are supplied directly with gas, whereas buildings supplied with gas might shift to district heating in the course of time, as the urban heat density increases.

It is equally important that all apartment buildings are properly organised. Privatised apartment buildings must, in accordance with the law on privatisation, have established a condominium with a home-owners association, which is the legal owner of the building envelope and thus the legal district heating consumer. The home-owners association is responsible for all internal installations and for distributing all costs among the apartment owners, including costs of heating. Likewise, many housing companies in the rental building sector have established local advisory boards elected among the tenants. These have been asked to take part in managing the local budget, thereby gaining some of the obvious benefits of private ownership.

Financing is a problem in many countries, but not in the district heating sector in Denmark. Most companies finance their investments in networks and CHP plants 100% by international credits at the lowest market based interest rate. Banks compete to offer the best conditions as long as they can see that the security is high. And security is high, due to the following reasons:

• The national energy policy is stable
• The municipalities guarantee for loans, also to the consumer co-operatives
• The consumers are obliged to remain connected and to pay at least the fixed tariffs
• The proven technology and maintenance management ensure long life-time
• The consultants provide know-how on feasibility studies and project implementation
• There are clear roles of responsibility and efficient decision-making in the companies

Therefore other private investors, ESCOs, BOOT concepts and the like offer no real competition.

You may find a district heating system, which, one could say, is typical for the Danish approach today; however, there are no obligatory norms and standards that specify detailed technical solutions and design criteria which have to be followed. On the contrary, the technological development is very dynamic and you will find a huge variety of technical solutions. Installations which are more than 30 years old and which still operate are, of course, different from the new installations, but even new installations may be based on different solutions adjusted to the local conditions and the opinion of the local decision makers.

We could, for example, list the following variety of existing technical solutions:

The district heating company will, often assisted by its consultant, select the concept which gives the consumers the best value for money in the long run. After all, the consumers are the only ones to pay for the costs. Despite the many different technical solutions in the different DHP, they all have the same advantages as energy source:

It comes as a surprise to many that the preinsulated pipes and other components in the heating systems (as well as modern wind turbines) have been invented and developed in a small country like Denmark. What is the secret?

It is difficult to pinpoint one specific reason, but the following factors have been important for this development:

• Norms and standards are based on prescribed functions (not on specific details) and therefore they allow a huge variety of solutions (as described above) which stimulate a competitive development
• This development creates a good environment for co-operation between district heating companies, suppliers of equipment and consultants
• Many small enterprises in the private sector work in a competitive environment
• The government supports the development of energy efficient technology by investment subsidies to individual projects in the initial phase
• The Danish District Heating Association offers support and advice to all its member-companies and acts as interest-organisation for the sector

Generally speaking, one could say that decentralisation of activities and responsibility might be the secret. 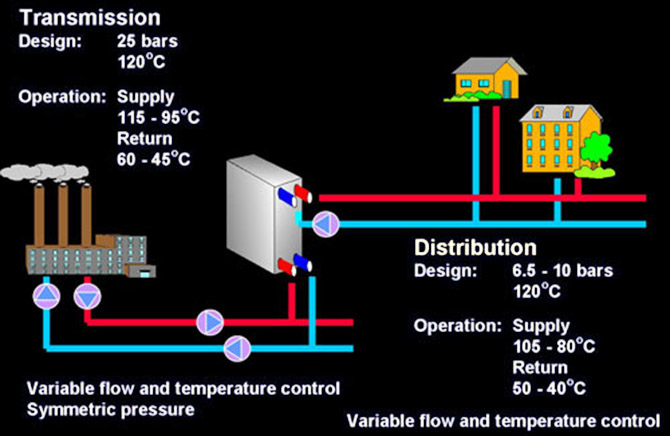 The Danish district heating systems are normally not considered to be the largest in the world. Denmark is probably more known for small and simple local systems, even in villages. One reason for this is a modest heat load due to a modest climate. Another reason is the very high degree of building insulation.

However, if we compare the heated floor areas which are supplied from the same integrated system, then the systems can be quite large. For example, the district heating system in the Copenhagen region is one of the world´s largest.

In total, around 50 million m2 of heated floor area is supplied from one, pool-operated system and the total heat production is around 30,000 TJ annually.

The project provides an interesting example of:

The heat is supplied from 4 CHP plants, 4 waste incinerators and more than 50 peak boiler plants to more than 20 distribution networks by 3 interconnected transmission companies, CTR, VEKS and Vestforbrænding – but still, it is one single pool of optimal load dispatch. 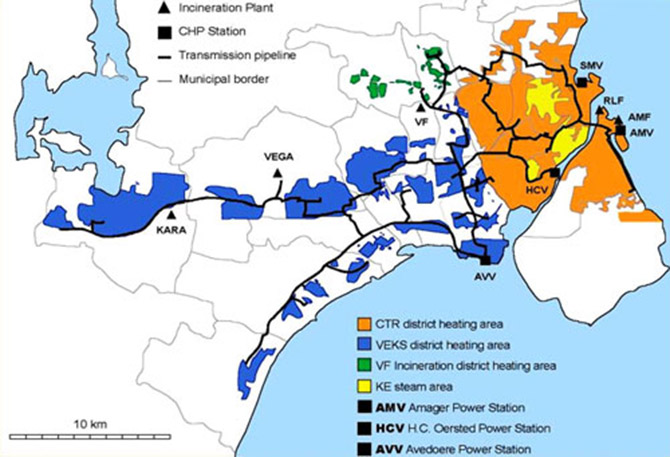 The most normal and simple pressureless tank with direct connection can be found in sizes ranging from 500-50,000 m3. A few accumulators of a more complex type (with temperatures up to 120 °C and separate connection via pumps and throttle valves), e.g. the tanks in the Copenhagen system, have capacities of 2 x 20,000 m3. 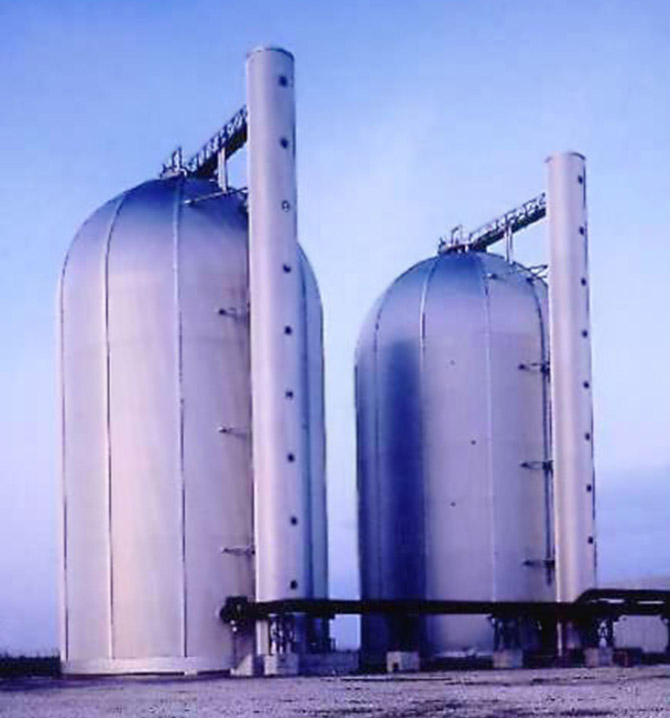 Obviously the advanced solutions often attract most attention. This is not fair, since one could, based on the Danish experiences, design small simple systems with the following main characteristics:

• Maximum design temperature 95 °C
• Variable flow and operational supply temperature down to 60 °C in the summer
• Network of the preinsulated bonded system without expansion loops, compensators or pre-stressing. For further lowering of costs, curved pipes can be installed in a new optimised trench only 60 cm below ground
• Substations with direct connection and differential pressure valve in each building complex
• Production of domestic hot water in each building substation
• Flow meter or heat meter in each substation to distribute costs among the buildings
• Closed heating circuit and water treatment

Such simple and cheap solutions could be more important than the advanced ones for the further market development of district heating in the western countries and for the survival of the small local distribution systems in the Central and Eastern European states.