DBDH person and DBDH member of the year

At DBDH´s annual general assembly held last month “DBDH person of the year” was elected. This year the title went to Jørn Urup Nielsen from the company DESMI as DBDH highly appreciates his energy, engagement and use of DBDH. As Jørn Urup Nielsen was detained from attending the assembly due to business elsewhere, his colleague Henrik Ottesen accepted the prize on his behalf.

Also “DBDH member of the year” was elected. The honour went to Danfoss represented by Casper Waad Svane Nielsen. Danfoss has been an active member of DBDH for many years and has always contributed with a high level of activity both domestically and internationally. The company participates frequently in DBDH members’ meetings and in international conferences. Danfoss is also a keen and competent contributor to articles in HOT|COOL and also supports the magazine financially with regular advertisements. 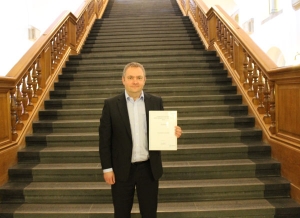