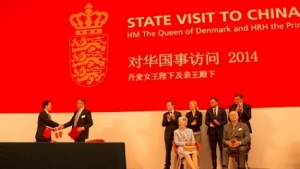 ​Every day, huge amounts of energy are wasted in China resulting in an equally massive CO₂emission. But times are changing and sustainability is now high on the official agenda in the world’s most populated country. A VIP visit from Denmark resulted in new projects for COWI.

​Last week, Danish Queen Margrethe II visited China accompanied by the largest delegation in Danish history ever on a state visit. The visit was a testament to China’s economic and cultural attraction, and the expectations regarding business opportunities for Danish companies were indeed high.

COWI participated actively in the events and Senior Vice President for COWI China, Middle East and Central-Eastern Europe, Mogens Heering, is pleased with the outcome of a busy week.

“Although many challenges have to be overcome before the urban Chinese population can breathe clean air and enjoy greener energy, Danish companies are able to actively contribute to a positive development, particularly with know-how and consultancy on sustainability during times of fast economic growth,” he says.

New contracts on sustainable urban development
COWI signed two significant new contracts during the official Danish state visit, both of which will contribute to a more sustainable China.

“We see significantly growing business opportunities in China based on consultancy within sustainable urban development and energy, particularly in the province of Jiangsu which is a frontrunner on sustainable solutions,” says Jens Moth, Managing Director of COWI China. He explains that one of the new contracts signed is for a project on contaminated soil in the city of Wuxi in the very same province as another important ongoing COWI contract, namely Nanjing Lighthouse, which is a model for sustainable construction in China inspired by the building Green Lighthouse in Copenhagen.

“Nanjing Lighthouse is a statement for COWI and making a statement in China is important for businesses in order to get going in China. The Wuxi contract is another significant project for us and unique because it is done in co-operation with Danish municipalities that have had the same challenges with contaminated soil that Wuxi is now facing,” says Moth from COWI’s office in Beijing.

He adds that the second contract signed during the state visit was with Green China, an organisation consisting of Danish business working with sustainability in China. The contract is an important milestone for future work on the Sino-Danish ECO Pharmapark, which is to be established in Nanjing High Tech Zone.

Not only did Danish businesses find the state visit fruitful for the consolidation of Danish-Chinese co-operations. The Chinese officials were also pleased with the attention from Danish media because they plan to attract more foreign companies to do business in their country.

Mogens Heering is certainly pleased: “H.M. the Queen’s visit helped to consolidate that Danish companies take China seriously and that we mean business.”