Heating plants in six municipalities in Serbia will receive EUR 26.7 million to switch from fossil fuels – coal and heating oil – to biomass, the Ministry of Mining and Energy said on its website.

The first two municipalities to get new heating plants will be Priboj and Mali Zvornik, by the of 2022. The contracts for the allocation of funds for the installation of new biomass boilers and the renovation of the district heating system have been signed by representatives of the two municipalities and Serbian Minister of Mining and Energy Aleksandar Antić, while the contracts for the municipalities of Prijepolje, Nova Varoš, Novi Pazar and Majdanpek will be signed in December. The installed capacity of the boilers in the six heating plants will be about 30 MW.

The first two municipalities to get new heating plants will be Priboj and Mali Zvornik, by the of 2022

Tendering for the EUR 8.3 million investment in the heating plants in Priboj and Mali Zvornik is expected by the end of the month. A few years ago, the municipality of Priboj started switching its boilers to biomass.The total value of the project, which was launched in mid-2017, is EUR 26.7 million

The total value of the project, which was launched in mid-2017, is EUR 26.7 million, of which EUR 20 million is a loan from German development bank KfW, with an interest rate of 1.1%, a two-year grace period, and a repayment schedule of 18 years. KfW is also providing a EUR 2 million grant, while the government of Switzerland will secure a grant of EUR 4.75 million. 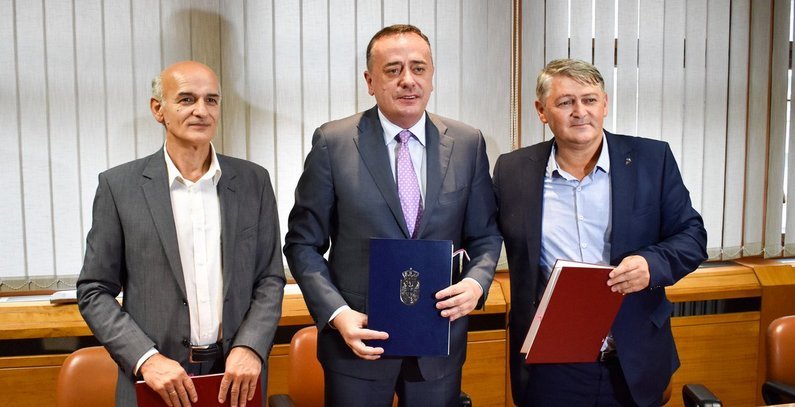 Photo: The signing ceremony (Ministry of Mining and Energy)

Antić said that the project will decrease pollution caused by the use of coal and heating oil in the towns in question, reduce import dependency, and cut the municipalities’ heating expenses by up to 15%. He also said that another 19 heating plants in Serbia are interested in switching to biomass.

Arne Gooss, director of KfW’s office in Belgrade, and Priska Depnering, deputy head of cooperation at the Swiss Cooperation Office in Serbia, agreed that the project is good because it supports the fight against climate change, contributes to energy efficiency, economy and better heat supply.