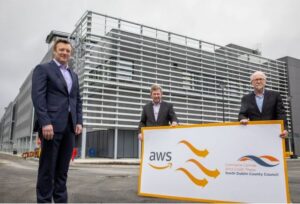 Codema is delighted to announce that the contract has now been awarded to develop Ireland’s first large-scale district heating scheme, which will initially involve a number of South Dublin County Council’s buildings and the TU Dublin-Tallaght campus, and will connect other public, private and residential customers in the Tallaght area to the network in subsequent phases.

The contract was awarded by South Dublin County Council to Fortum eNext Ireland Ltd, with construction due to begin on Phase 1 of the network in early 2021.

The Tallaght District Heating Scheme is being led by South Dublin County Council with support from Codema. The scheme will also operate as Ireland’s first not-for-profit utility and will make a significant contribution to reducing carbon emissions in the area, saving almost 1,500 tonnes of CO2 each year and establishing Tallaght as a leader in innovation in the area of climate change.

District heating is a network of highly-insulated pipes that delivers low-carbon heat from a central energy source to provide space heating and hot water to the buildings connected to the network.  In the case of the Tallaght District Heating Scheme, this project will deliver a high level of innovation, as waste heat from the nearby Amazon data centre will supply the heat to the network.  During normal operation, heat demand will be 100% covered from the data centre waste heat.

The first phase of this project will connect existing and new local authority buildings and the TU Dublin-Tallaght campus to this local district heating network.  There is also potential for the new residential development at Belgard Gardens, which will be home to more than 3,000 people, to connect to the network at a later phase.

Speaking after the contract was signed, CEO of Codema, Donna Gartland, said: “This is a landmark for Ireland’s low-carbon heating sector. We are highly reliant on fossil fuels for heat, but we have the solutions to change this. For example, in Dublin we have enough waste heat and renewable heat sources to heat the equivalent of over one million homes.  This highlights the huge potential to roll out low-carbon district heating schemes across the region and I would like to congratulate South Dublin County Council and all parties involved on delivering the first of what will hopefully be many district heating projects to be delivered in the years to come.”

Daniel McLoughlin, Chief Executive of South Dublin County Council said: “The Tallaght district heating network shows how public-private collaboration using well-established district-heating technology can construct a system to recycle heat from an Amazon Web Services data centre to meaningfully contribute to helping Ireland achieve its 2030 sustainability targets. We believe the work we have done with Fortum eNext and Amazon Web Services to create this scheme can become a template for other districts across Ireland. We look forward to future collaborations as South Dublin County moves towards a low-carbon future.”

South Dublin County Council will receive funding of almost €4.5 million for the Tallaght District Heating Scheme through the Government's Climate Action Fund, as well as support from the Interreg North-West Europe HeatNet NWE project and the Sustainable Energy Authority of Ireland.