The district heating companies invested significantly in large, collective heat pumps in 2020, so that the capacity at the beginning of 2021 was 454 MW of heat.
The large collective heat pumps in district heating have increased significantly during 2020. A new note from Dansk Fjernvarme shows that capacity during 2020 was increased by around 350 MW heat, so that at the beginning of 2021 it is 454 MW heat.

There are now a total of 118 heat pump systems in the district heating sector, of which 77 were established during 2020, and the head of analysis at Green Energy, Jesper Koch, believes that the desire to establish district heating plants "almost went crazy" in 2020.

- It is to a large extent the lower electric heating tax that has made it financially profitable for several of the district heating companies to invest in large, collective heat pumps, and we can, among other things, see a pattern where the collective heat pump now becomes the base load, while biomass is used for peak load, Jesper Koch explains.

He also mentions - as a reason for the explosive growth in collective heat pumps - that many plants have utilized the last opportunity for subsidies via the Energy Saving Scheme, and therefore he estimates that the district heating plants will probably not continue the expansion with large collective heat pumps at exactly the same pace in 2021 . 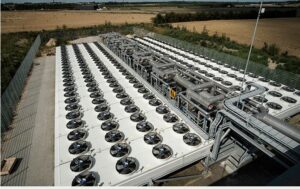 Geothermal energy must play together with heat pumps
At the same time, he also points out that the need to establish the very large collective heat pumps faces some challenges. This applies not least to the larger cities, where the biomass is under political pressure to be phased out or at least significantly reduced.

In Esbjerg, there is already a long way to go with a heat pump alternative to coal in the form of a seawater heat pump , but elsewhere you do not have that option. And here Jesper Koch calls for more power from a political point of view behind the possibility of utilizing geothermal energy in combination with the collective heat pumps.

- We believe that geothermal energy will be a good way to get started in some of the larger cities and get the collective heat pumps tested. However, a limited pool will be set aside for current district heating companies to prepare their networks to receive the geothermal energy. So here we need to have more political action to move forward, it sounds from Jesper Koch.