(CNN) Ski slopes, breweries and manicured parks are not the usual trappings of a power plant. Historically, these industrial monoliths have been functional eyesores — often inciting resentment and “not in my backyard” protests from local residents.
But as cities generate more trash — the World Bank predicts global rubbish disposal will triple to 4 billion tons a year by 2100 — the need to change our attitudes to waste is becoming more urgent.
Architects around the world are rising to this challenge. By building beautiful waste facilities and power plants that people interact with, they hope to make us think twice about creating so much rubbish. Examples of this trend include a discreet power plant atop a brewery in Sydney, and a ski slope crowning a waste-to-energy plant in Copenhagen.
Backyard beauty
China’s Shenzhen East Waste-to-Energy Power Plant — set to become the world’s largest waste-to-energy plant when it opens in 2020 — is a beautiful example of opinion-swaying architecture. Designed by Schmidt Hammer Lassen Architects and Gottlieb Paludan Architects, the circular plant eschews the ugly boxy facades of traditional industrial buildings.
Its rooftop skywalk offers 360-degree views of the surrounding mountain range, and it boasts manicured public gardens. A visitors’ area educates the public — lured to the site by leisure facilities — about the importance of reducing waste.
An incinerator in Fos-sur-Mer in the south of France display a more conventional approach to industrial design. The plant incinerates 5,000 tons of waste every day — essentially one-third of what’s generated by the city. While encouraging residents to reduce waste, the plant is also trying to minimize the impact of that endeavor with renewable energy. Its roof is equipped with 473,612 square feet of solar panels, roughly the size of eight football fields, meaning it can provide its own green energy supply.

“There is a continuing waste challenge in Shenzhen, as there are in many large cities around the world,” says Chris Hardie, the project’s lead architect. “In order to really attempt to solve the problem, we need to engage with citizens and educate them about the challenges.”

By bringing people face-to-face with their trash, the architects hope attitudes towards waste and recycling can be updated.

A people project
Integrating waste facilities and power plants into society is a tall order.

“A power plant is typically not the first place you’d think … to spend your leisure time,” says Hardie. “But could we change that.” In Copenhagen, BIG (Bjarke Ingels Group) has broken ground with a waste-to-energy plant, called Amager Bakke, which will feature the world’s first ring-blowing steam stack.
The plant emits a ring of smoke, 70 feet in diameter, every time it releases a ton of carbon dioxide. It’s a visual reminder to the public about the emissions created by waste. The site will also double as an adventure sports facility, when it opens in 2018. A ski slope winds down the building from the roof, while people can go rock-climbing on the facade or relax in the surrounding park. 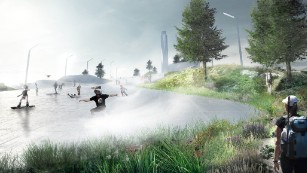 Amager Bakke Waste-to-Energy Plant, Copenhagen — The planned ski slope begins on the roof and wraps around the facade and down into the hills below.

Meanwhile, in Sydney, a heritage building that once housed Carlton & United Brewery has become a discreet power plant. Called The Brewery Yard, and designed by Tzannes Architects, it is nestled on the roof of the now closed brewery. The award-winning design elegantly juxtaposes heritage and technology, with three mesh-like towers crowning the 20th-century red brick building.

When completed, the plant will provide electricity and water to the development’s 2,200 apartments.

Blast from the past
The concept of beautiful industrial design is not an entirely new one. In the 1980s, eco warrior and Austrian architect Friedensreich Hundertwasser rallied for “blissfully disguised” industrial facilities. He even designed a few himself.

Hundertwasser’s most famous industrial building is the Incinerator Spittelau District Heating Plant, finished in 1992. Not only does that iconic plant power 60,000 apartments, it’s also a source of national pride. The plant’s golden sphere and colorful checkered façade still stands tall on the northern side of Vienna city. A quarter of a century later, it seems the waste industry is finally catching up with Hundertwasser. Pretty soon we all may be asking: “How about my backyard?”