Arcon-Sunmark: New solution should put the lid on issues with thermal storage

Arcon-Sunmark, who are best known for their solar heating systems, are well on the way with a newly designed cover for Pit Thermal Energy Storage. The cover – and the entire concept – drew considerable interest at the recent national meeting of Danish district heating plant operators in Aalborg.

There are good reasons why Danish operators are investing in full-scale Pit Thermal Energy Storage: in the future they will be one of the most cost-effective and flexible energy storage solutions. They make it possible to replace fossil fuels with CO2-neutral, solar-heated energy, even in the coldest and darkest months of the year. They can also exploit excess heat or electricity produced in periods when it is not needed, and release the heat later, when it is required.

Unfortunately, there have been some issues with the covers – or they could be called lids – for Pit Thermal Energy Storages. So, the whole industry is pleased when Knud Erik Nielsen, Sales Director at Arcon-Sunmark, announces that they have developed a new cover for heat and energy-storage pits.

“We stand on the shoulders of other developers and have seen the problems they have faced with the solutions they have chosen. One of the major problems is the accumulation of moisture in the insulation of the cover. All large Pit Thermal Energy Storages in Denmark are enclosed in plastic linings on the bottom and sides and on the water surface, to make them watertight. A similar plastic lining is used as the covering on top of the insulating layer, so that it is rainwater-proof. However, one of the challenges with the plastic liners is that they are not completely impermeable to water vapour, and the diffusion of water vapour through the liner depends on the temperature. Thus, considerably more vapour diffuses into the warm liner at the water surface than out through the upper liner above the insulation. As a result, the moisture cannot escape from the construction, and accumulates in the insulation. We have now made changes to solve that.”

Upside-down is the right way up
Arcon-Sunmark have gathered inspiration for the new solution from many sources, but the main idea came from the building industry, where inverted roofing systems are used for roof terraces and car park decks. Chief Specialist, Morten Vang Bobach explains:

“We know it is impossible to avoid the permeation of vapour, so we have altered the structure of the insulating layer into an open construction that allows the vapour to diffuse out. It is like an inverted roof system. And in the same way as on an inverted roof, it is also possible to drain water under the insulation to the nearest pump well, so it is pumped away from the Pit Thermal Energy Storage.”

Striking results from efficient separation and insulation
Besides developing a new design for the insulation layer, Arcon-Sunmark have also decided to divide the large single surface into smaller sections, each centred on a pump well, instead of a single pump well at the centre. The sections are constructed so that they all have an inward fall toward the well. Morten Vang Bobach says there are several advantages:

An essential factor for the new solution is that Arcon-Sunmark have replaced the weighted pipes that normally keep the construction in place with a layer of bricks. The results so far show that they hold the cover in place better, and at the same time create the necessary fall towards the pump wells, to allow efficient surface drainage and venting of air from the storage water. In addition, a new insulating layer currently being tested at the Pit Thermal Energy Storage in Marstal is reported to give a 25% improvement in insulation.

Concept and cover with great potential
It is with great satisfaction that Sales Director Knud Erik Nielsen observes that three years of intense effort have paid off with the concept of the cover for Pit Thermal Energy Storages. It is drawing a lot of interest – most recently at the national meeting of the Danish District Heating Association in Aalborg. The interest is there, even though tests and certification with Lloyd’s Register are still in progress. But all this interest is understandable, Knud Erik Nielsen concludes.

“We all have to think along new lines in our efforts to reduce our CO2 emissions. Undoubtedly, more and more people can see the great potential in energy storage. Not only from solar heating, but also from waste heat and other sources of surplus heat. Storage makes it possible to be flexible all the time and keep abreast of the cheapest and most environment-friendly solution. For the big central-heating plants, it is already a must-have here and now.”

Arcon-Sunmark is a Danish company owned by VKR Holding A/S, which has altogether about 14,900 employees in 41 countries. Arcon-Sunmark is one of the world’s leading specialists in full-scale solar energy solutions for district heating plants and industrial operations. The company is located in Skørping, in Denmark, and has supplied more than 80% of the largest solar heating installations in Europe. 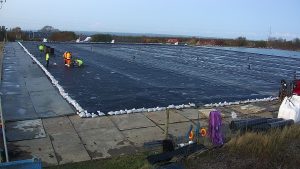