A joint investment of around DKK 100 million in a Power-to-X plant will boost the production of Danish biogas at Nature Energy's biogas plant in Glansager on Als. 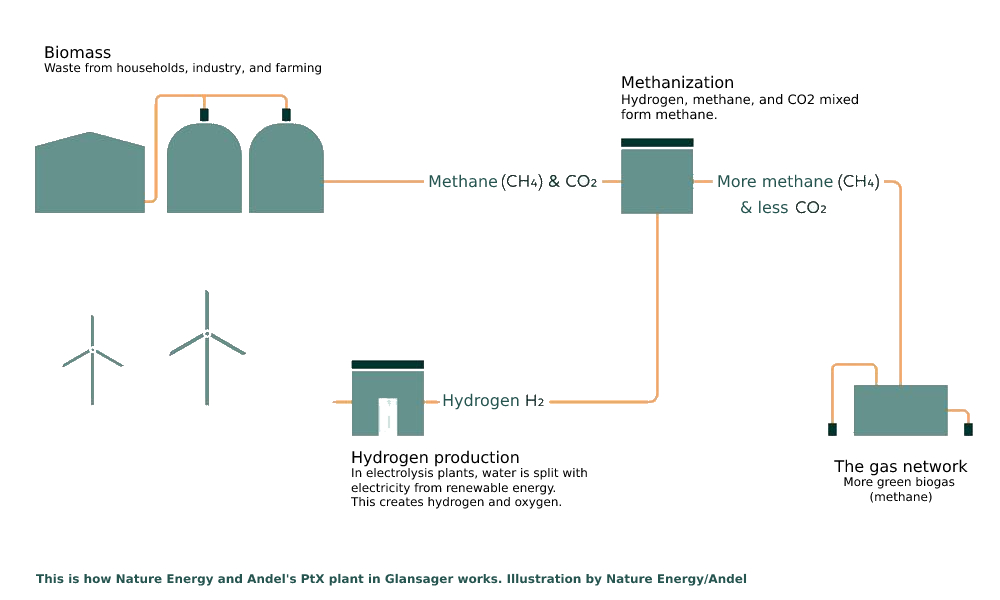 Together with the energy and fiber network group Andel, Nature Energy is building a PtX facility.

- Right now and for many years to come, there is a large market for biogas both in and outside Denmark because it replaces fossil natural gas and displaces CO2. Therefore, it is good for both the green transition and Denmark's leading position in energy production and development of future solutions that we are now using Power-to-X to increase biogas production, says CEO of Nature Energy Ole Hvelplund.

Industrial scale
The facility in Glansager will increase biogas production with surplus electricity from wind turbines and reduce CO2 emissions. This happens when, popularly speaking, electricity is added to water in an electrolysis plant. Hydrogen and oxygen are formed here. The hydrogen is added to Nature Energy's methanisation plant, where the hydrogen is combined with the captured CO2. This creates methane gas that has the same quality as the natural gas extracted from the underground.

In recent years, Nature Energy has first carried out laboratory tests with this form of Power-to-X. It has since successfully operated a pilot plant at its biogas plant in Holsted.

With the facility in Glansager, Power-to-X moves out of the experimental stages and into the industrial scale.

Concerning the establishment of the Power-to-X facility in Glansager, X-automation is developing control. And a collaboration agreement has been entered with the University of Southern Denmark's Institute for Green Technology (IGT) on research into other CO2 sources that can be used in Power -two-X.

Andel and Nature Energy are currently in dialogue with the relevant authorities for construction and operation approvals.

Construction is expected to start in autumn 2022, and the facility will be operational in summer 2023.

Sector coupling 'at its finest.'
The project is a strong example of how the Danish energy sector finds new solutions to one of our biggest crises.

- Climate change is one of the biggest challenges the world faces. We all must commit ourselves further so that we reduce CO2 emissions. With the war in Ukraine, fossil energy threatens our climate and freedom. An important weapon is a green transition - and precisely, our efforts and contribution in that context play a decisive role. Our new partnership with Nature Energy is an example of how we can attack one of the world's challenges via sector coupling, says Jesper Hjulmand, CEO of Andel.

Andel is responsible for investing DKK 50 million in the electrolysis plant, which will produce hydrogen.

- Our involvement in the Glansager project is a desire to establish an increasing interaction between different sectors in the energy industry to create a more flexible and dynamic energy system with far better opportunities to integrate renewable energy sources. We choose to invest in hydrogen because hydrogen is set to play a key role in producing sustainable fuels for the energy sector, ships, planes, and other heavy transport, says Jesper Hjulmand.

At the same time, hydrogen is an efficient way to utilize the surplus of renewable wind energy when production is higher than consumption because it can be included in Power-to-X technology and increase biogas production.